SECRETARIAT awarded Preakness record at 1:53 after review !!! Justice was Served for the greatest of all times, the mighty “Big Red” !!!

Home » SECRETARIAT awarded Preakness record at 1:53 after review !!! Justice was Served for the greatest of all times, the mighty “Big Red” !!! 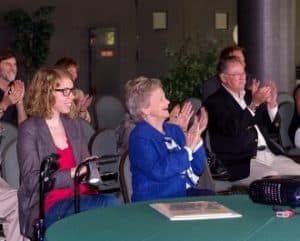 Penny Chenery (center), Secretariat’s owner, at the hearing Tuesday when his time for the 1973 Preakness Stakes was recognized as 1:53.

The Maryland Racing Commission on Tuesday voted unanimously to change the official time of the 1973 Preakness Stakes won by Secretariat from 1:54 2/5 to 1:53, a time that will give the two-time Horse of the Year the record in all three of the Triple Crown races.

The commission approved the change after two hours of testimony at a meeting at Laurel Park, the sister track of Pimlico Race Course, where the Preakness is held. Penny Chenery, the late horse’s owner, requested the hearing on the basis of analyses conducted by companies she had hired to review the videotapes of the race.

The vote resolves a controversy that has dogged the race since Secretariat crossed the Preakness finish line more than 39 years ago. The official electronic teletimer clocked the race in 1:55, one second slower than Canonero II’s record for the race at the time, but that time was revised after a review of the film determined that the timer had malfunctioned. Two timers employed by Daily Racing Form had hand-timed the race in 1:53 2/5, three-fifths of a second faster than Canonero II.

DRF , which had officially recognized the 1:53 2/5 mark for the race since it was run, will now recognize the 1:53 mark established by the commission. In addition, Mike Gathagan, a spokesman for Pimlico’s operator, said that the track would adopt the new time as the official mark for the 1973 Preakness.

Prior to the hearing, representatives of Chenery had said that they had hired three separate companies to perform “forensic analyses” of the videotape of the race. According to the representatives, the companies had established a time for the race within an accuracy of 0.03 of a second, but the representatives at that time declined to provide a specific time they would seek to establish during the review.

Leonard Lusky, one of Chenery’s representatives, said after the hearing that they were “very pleased” with the ruling.

“We had five analysts look at the video, and all five said that it was 1:53 flat,” Lusky said. “We are cautiously optimistic [the new mark will be recognized]. We definitely felt fortunate that everyone was saying the same thing.”

The record breaking race for the ages !!!!!